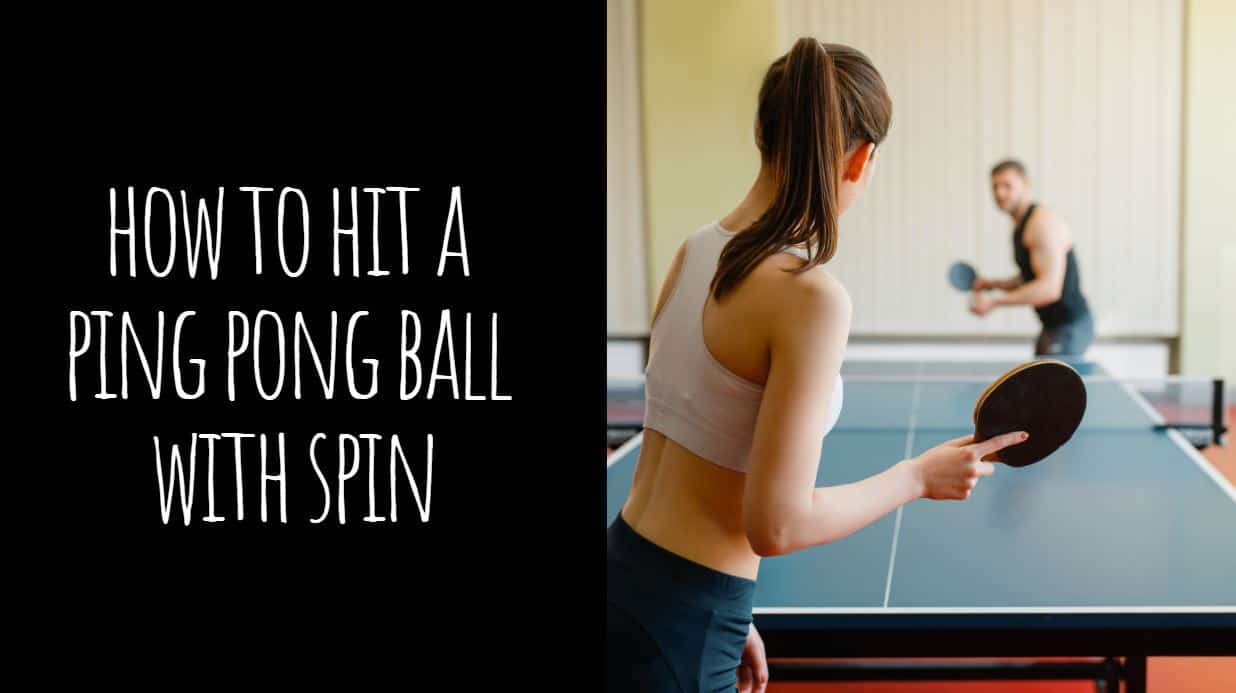 Casual players might not know this, but there’s a lot of strategy involved in Ping Pong. There’s a reason why it’s considered so good for your brain, after all.

If you don’t have a lot of experience, these kinds of strategies can seem out of reach. But with a little research and practice, you can do it, too.

That’s why we’ve created this quick guide on how to hit a Ping Pong ball with spin.

Why hit a Ping Pong ball with spin?

On the surface, it might look like there’s no reason to hit your ball with spin. As long as the ball gets across the table, it should be good enough, right?

Well, there are actually strategic advantages to spinning the ball. For one thing, it makes the movement of the ball difficult to predict.

Your opponent will have a much harder time responding to a ball that’s been hit with a spin. The ball could ricochet off their paddle in a random direction or they might miss it entirely.

In addition, it’s good showmanship. A ball with a spin to it is more interesting to watch as it flies across the table.

How to Hit a Ping Pong Ball with Spin

At its core, hitting a ball with spin just means you’re brushing the paddle over it from different directions rather than hitting it straight-on. However, there are three main types of spins, and how you get them depends on which way you brush the paddle over the ball.

The three main spins are:

In a topspin, the ball rotates forward, towards the other player. It’s kind of like it’s somersaulting across the table, and it will naturally curve down towards the playing surface.

With a backspin, the ball will spin backwards instead of forwards. Because of this rolling backwards motion, it will slide smoothly and quickly across the surface of the table.

You’ll do the opposite motion of what you’d do for a topspin. Instead of brushing upwards, you’ll cut downwards towards the ball, angling your paddle slightly underneath it as you hit it.

You can see a demonstration of how to achieve a topspin and backspin in the video below.

Making your ball spin sideways, which the sidespin is named after, can be pretty tricky. Like with both the top and backspins, you’ll need to hit your ball from the direction you’d like it to spin in.

That means you’ll need to move your paddle so that you hit the ball from the side. One way to do this is to hold your paddle with the top facing downwards, hooking around and swiping at the ball.

For a demonstration of various sidespin techniques, you can look at this video:

Responding to a Ping Pong Ball with Spin

So what do you do if your opponent has served you a ball with a spin on it?

Truthfully, this just takes practice. If you have a friend who knows about Ping Pong, you can have them serve you balls with topspin, backspin, or sidespin on them.

Learn to memorize the way these motions look, so you know what kind of spin is coming at you.

Then, simply practice hitting them back. It will take time observing how each spin looks, but once you get familiar with how they move, you’ll know which angle to return them from.

As you can see, Ping Pong is a real sport that takes a lot of skill. Just like a baseball can be pitched with a spin to it, so can a Ping Pong ball be hit with a spin.

Top Ping Pong players around the world use spins to make it harder for their opponents to respond. As a bonus, these spins look like magic to spectators.