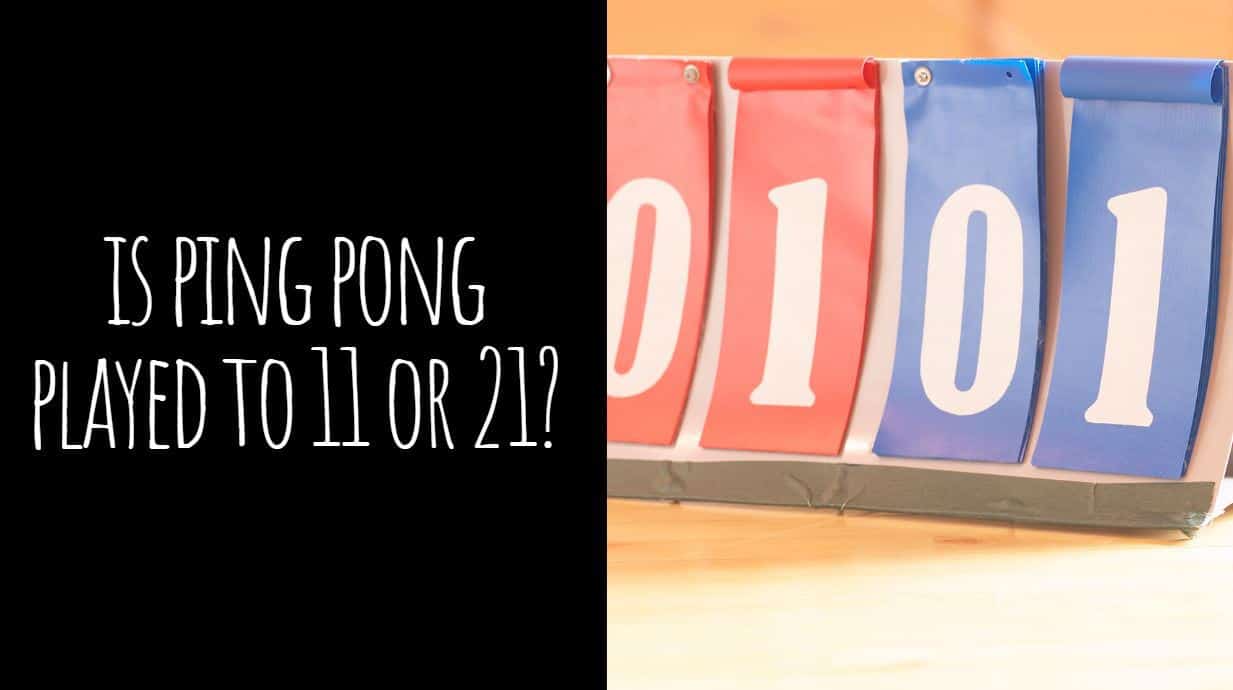 With any sport or game that withstands the test of time, changes have to be made. If it fails to keep up with the times, the sport becomes outdated. Players and fans gradually lose interest.

Ping Pong is an example of a game that has made changes with the times, keeping itself relevant. These changes have included paddle color and ball material in the past.

As recently as 2001, another change was made: the amount of points you need to win a game.

If you’re not sure whether Ping Pong is played to 11 or 21 now, we’ll give you the answer and explain why the change was made.

Use These Links to Navigate this Guide >>
Is Ping Pong Played to 11 or 21?
How to Score Points in Ping Pong
Wrap Up

In 2001, the International Table Tennis Federation changed the amount of points and rounds the game is played for. Previously, it was played until someone reached 21 points, and now it’s played until 11 points.

Again, there was a good reason for the change. When games were played until someone reached 21 points, they often went on for too long and didn’t work with streaming or TV very well for that reason.

Furthermore, one player would sometimes get a huge lead early on in the game. Even if it was impossible for the opponent to win, both players would be forced to play until the requisite 21 was reached.

As you can imagine, this was boring for spectators. Decreasing the amount of points you need to win a match has made the games easier to broadcast by streamlining them.

Keep in mind, though, that it’s possible to have way more than just 11 points when you win a match, because there’s also a rule stating that the winner needs to have at least two more points than the loser.

And once you reach 11 points, the entire game isn’t necessarily over. Currently, the rules state that you need to win the best five out of seven matches.

How to Score Points in Ping Pong

So how do you get points in Ping Pong? There are actually tons of different ways.

Perhaps the most common ways of getting points, though, are when your opponent misses a ball landing on their side, fails to get the ball back across the table to you, or touches any part of the table’s surface with the hand not holding a paddle.

You can also lose points in Ping Pong, in addition to gaining them.

You can read more about all the ways of gaining and losing points in our guide on scorekeeping here.

So many games and sports have fallen by the wayside when they couldn’t keep up with the changes in society. If you need an example, you can find a long list of extinct sports here.

What makes Ping Pong different from any of the sports on that list is that it’s flexible. Instead of rigidly adhering to concepts that people don’t enjoy anymore, it goes with the flow. Rules and equipment are updated whenever necessary.

We think that’s what sets Ping Pong apart. Because of its willingness to change with the times, we fully believe it will be popular for a long time to come.

If you’re interested in getting some of your own Ping Pong equipment, why not start with a table? You can see our favorite red tables here and blue tables here.