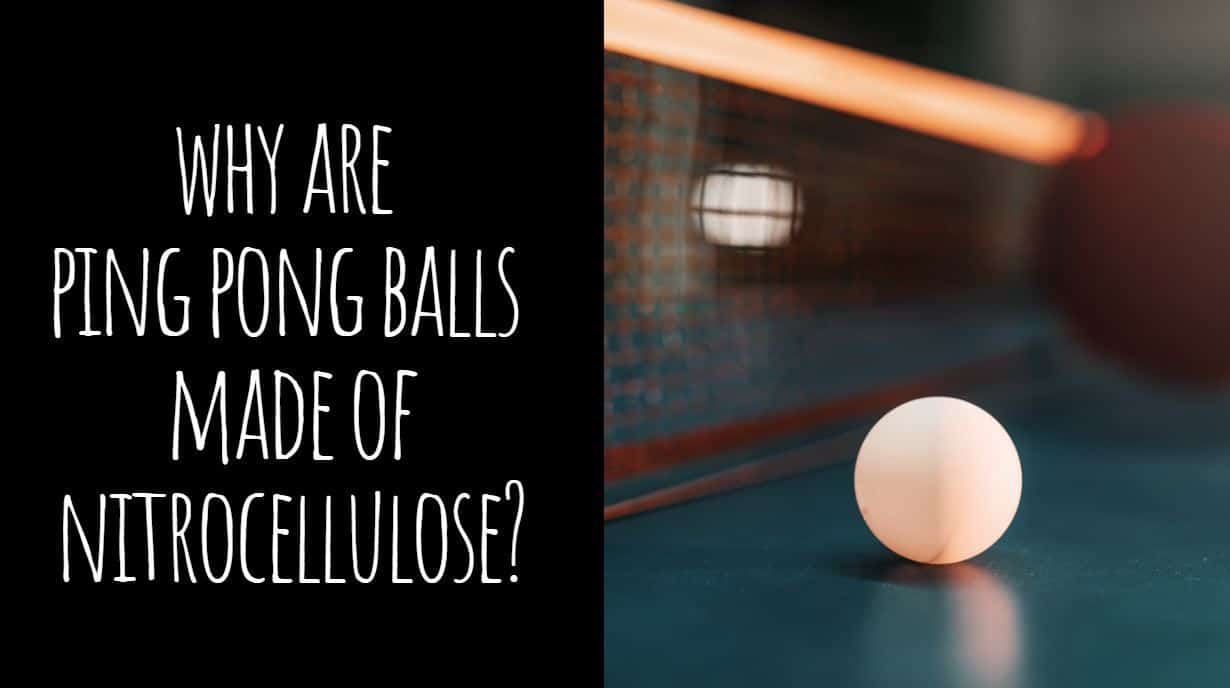 Ping Pong is a game with a shocking depth of history behind it. You wouldn’t think so at first – it just seems like a simple tabletop game that everyone plays at one point or another.

But the amount of thought and design that goes into every component is breathtaking.

Ping Pong balls are no different. Their size, shape, color, and material were all chosen for a reason.

Why Ping Pong Balls are Made of Nitrocellulose

When the sport was invented in the late nineteenth century, Ping Pong balls weren’t made of nitrocellulose. In the very beginning, they were actually just golf balls that were hit across the table using books.

The light, bouncy Ping Pong ball we know today didn’t come into being until 1901, a couple decades after the game was invented. James W. Gibb, a Ping Pong fan from the UK, discovered celluloid balls while he was visiting the United States. He thought they’d be perfect for the sport, and he was right.

In short, nitrocellulose is used simply because it gives the ball the bounciness and performance it needs to make the game possible.

Although celluloid is the standard material, it’s actually not required by the International Table Tennis Foundation.

Look up the material online, and you’ll find tons of videos of people lighting Ping Pong balls on fire. The problem with using celluloid is that it’s very unstable and flammable, which presents a safety hazard both for home and professional players of the game.

Because of this, the ITTF allows Ping Pong balls to be made from different materials. At the end of the day, what matters most is that the ball performs similarly to those made from celluloid.

As long as other materials can bounce, stand up to being batted back and forth with no visual damage, and look close to the same as a celluloid ball, it’s acceptable. You can read more about the requirements for non-celluloid balls here.

Ping Pong is a sport that has existed for over a hundred years. Since it’s been around for so long, it has had time to evolve.

This means that many aspects of the game have changed with the years. Players went from using book covers and golf balls to using specific paddles, balls, nets, and tables.

The material used in the construction of Ping Pong balls isn’t the only thing that’s evolved. Ping Pong paddles have also changed over the years. You can read more about why they’re red on one side and black on the other here.

What hasn’t changed, though, is how fun Ping Pong is for all players. That’s something we expect will continue to stay the same.

Ready to buy your own Ping Pong supplies? Take a look at our guide on where to buy a Ping Pong table.